I’d always thought that Carnaval was something that only happened in Rio de Janeiro but it seems it’s celebrated all across South America. I’m not sure if Carnaval celebrations predate the colonial invasions but with christianity they became a way to get all your sinning out of the way before the Catholic abstinence of Lent. There is an obvious African influence in the essence and rhythms brought by the many slaves and everywhere has developed its own regional flavour. I’d wanted to go to Rio for it but Brazil is just not going to fit into this trip so I did some research about the other best places to spend Carnaval. Encarnacion Paraguay came up in the top five and since we happen to be in Paraguay…Encarnacion it is!

It was a relief to escape the edginess of Cuidad del Este and get on a long hot dusty bus trip to Encarnacion. The bus was a bit of a shock after the air-conditioned, reclining seat, toilet-on-board comfort of bus travel in the south of the continent. This was more the no-frills version, complete with trays of dead chickens under the seats. Imagine our horror. The bus stopped at every possible corner of every tin-pot village. People got on and off, greeting all on the bus in Guarani “Mbaé’chepa!” and smiling all the way.

Paraguay is officially bilingual with Spanish as the language of work, business and formal interactions but the indigenous language of Guarani is used for everything else. Apparently everybody speaks Guarani but not everyone speaks Spanish, especially in the ‘campo’ (rural areas). In urban areas people often use a mixture of the two (Jopara). We have no idea what people are saying or even which language they’re speaking most of the time, but it doesn’t matter. We get by with a smattering of Spanish words, phrases written on scraps of paper, mime and Google. Everyone is so lovely that they seem to enjoy the whole communication challenge as much as we do.

On arrival at our new accomodation (a whole house on top of a shop) JH realised that he’d lost his mobile phone. Damn damn damn. I lost mine the week before, so not a phone between us. A phone is such a handy multipurpose travel item too. Since I’m still trying to get money back from our travel insurance for the things I got stolen in Santiago two months ago, I don’t feel hopeful about them being very helpful with this. Insurance companies are such scammers. Who carries around copies of all their receipts? This is what they seem to expect. Boo!

A couple of weeks ago we were on the other side of the river in Posadas Argentina looking across at the lights of Encarnacion and wondering what it would be like. Everything we’d read and heard gave us the impression that it would be something like a quirky poor cousin. So not true. It’s clean, modern, efficient, affordable (A$6 for a meal, 30c for a small can of beer), friendly, relaxed, fun and downright groovy.

Paraguayans are very chatty and our Airbnb hosts in Encarnacion are wonderful. We feel as if we’re staying with friends. Through them we’ve met some other great people and are doing lots of laughing. Even though it was pretty much last minute, the locals were determined that we would get tickets for the Carnaval parade. They drove us everywhere until we got some. We could have sat along the Costanera (river boardwalk) with many other people, but it’s much more exciting to be inside the Sambadrome.

It would have been good to have sparkly costumes but it’s too hot, too hard to organise and not enough time. When we get dropped off at one of the gates we see that there are many others in casual clothes too. There are apparently 40,000 people here but it’s so well organised that it doesn’t feel crowded. We make our way to our seat allocation in the stands and prepare to be entertained.

The Sambadrome is actually a single thin 3-4km long runway with seating stands lining both sides. A non-stop parade of feathered and sequinned dancing troupes, clowns, jugglers, gymnasts and outrageous floats make their way slowly from one end to the other, accompanied by fireworks, light shows, cheering and loud samba music with infectious drumbeats. It’s all about the spectacle – the fabulous costumes – and the atmosphere. Everyone dances in the stands. It’s impossible not to.

There are bars right inside the stands at the end of each set of seats (and loads more outside the stands). Our closest bar is a cocktail bar, so we grab some giant Pina Coladas for A$3 apiece and get partying. There are all kinds of services inside the Sambadrome like food stalls and even things like hairdressing salons. Some people choose to spend Carnaval getting their hair done. Strange but true.

Foam spraying is popular and hawkers walk around selling goggles to protect your eyes. I’m still getting it out of my shoelaces.

The parade goes on until 4am and then everyone heads out to the bars. We walk down to the Costanera and get a taxi home. It’s all so easy, relaxed and civilised. No hassle, no drama. A fantastic Carnaval experience. This goes on for four or five weekends here but we’re only here for one. 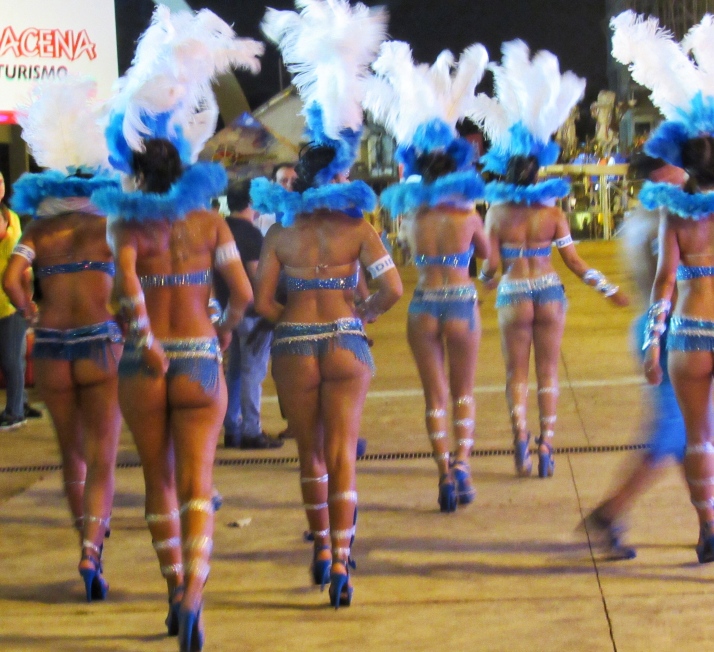 Apart from Carnaval there are lots of things to love about Encarnacion. The toilet seats are padded, there are tracks of raised concrete along the footpaths for blind people to navigate by, you can buy peanut butter and electronic cigarette supplies, it’s safe, there’s a vegan restaurant with a pay-by-weight buffet and random strangers talk to you in the street.

In our game of ‘places we could live’ Colonia del Sacramento in Uruguay was top of the list (for an abandoned building we fell in love with, it’s historical charm, nightlife and proximity to Buenos Aires) but it has just been eclipsed by Encarnacion. Encarnacion is ‘Iporaiterei’ – very very very good in Guarani. If the rest of Paraguay is anything like this I’m very very very happy. In fact, Paraguay is supposedly the happiest country in the world, so maybe there’s something in the air.

PS. We’ve just caught the bus from Encarnacion to Asuncion and I’m happy to report that this bus had aircon, toilet, reclining seats, no dead chickens and even intermittent wifi. So all buses in Paraguay are not the same. We did break down twice though which made the 6 hour journey more like 7 or 8.

3 thoughts on “Carnaval in Encarnacion”