We’ve picked up a bad habit of crossing borders by taxi. Well, we’ve done it twice now. I know it’s a bit decadent and kind of cheating but it’s so much easier. Especially with the language challenge (very basic Spanish and no Portugese or Guarani at all) when we’re carrying all of our belongings and our destination is known to be dodgy. The crossing from Puerto Iguazu in Argentina to Cuidad del Este in Paraguay seemed like it was going to be an especially tricky one as you have to actually go via Brazil, for which I don’t have a visa. Traveller’s reports describe buses that don’t stop, the dangers of not getting the right stamps in the right order and having to pay big fines, being stuck on the ‘friendship’ bridge for hours in the hot sun and being ripped off on arrival in Paraguay. We got a taxi across the border (via Brazil) from apartment door to apartment door with all the right stamps and no arrests for A$50. Bargain!

So here we are in our first stop in Paraguay – Cuidad del Este, known as the supermarket of South America. A place where everything is for sale tax-free, copyright-free and regardless of legality. There’s not a lot of reliable information available about Paraguay at all, so we’re relying on snippets from google searches (travel blogs and forums, mostly out of date) and what we can discover for ourselves. It seems that nobody has anything good to say about Cuidad del Este. This description from Trish Regan on CNBC makes it sound particularly appealing:

“A grimy border town buried deep in the Paraguayan jungle, Ciudad del Este is home to the largest illicit economy in the Western Hemisphere… a haven for drug-smugglers, arms dealers, counterfeit good traffickers and terrorist financiers. It is one of the last places you’d ever willingly travel to.”

Good-oh. No doubt reports are exaggerated but we’re being extra cautious just in case. Visitors are advised not to go out after dark, so we don’t. We have no need to anyway as we’ve landed in a fabulous self-contained apartment. Cuidad del Este is very multicultural with noticeable Arab and Asian populations. Just around the corner is a mosque. I thought I was imagining things when I first heard the call to prayer. I love that sound. There are lots of Chinese and Korean restaurants and next door is a cafe selling felafel rolls. Hooray! Arabic is almost as widely spoken as Spanish here and many other languages are added to the mix. I need a Babel Fish.

This place is all about shopping. There are two visible shopping tiers in the downtown shopping precinct – big high rise concrete shopping centres guarded by guys with shotguns and surrounded on all sides by a jungle of street stalls. There is so much stuff for sale it’s mind boggling, including piles of guns casually for sale on the streets. Guns seem to be everywhere and everyone’s guarding their stuff. I don’t know how many people really get shot but I have heard gunshots at night. 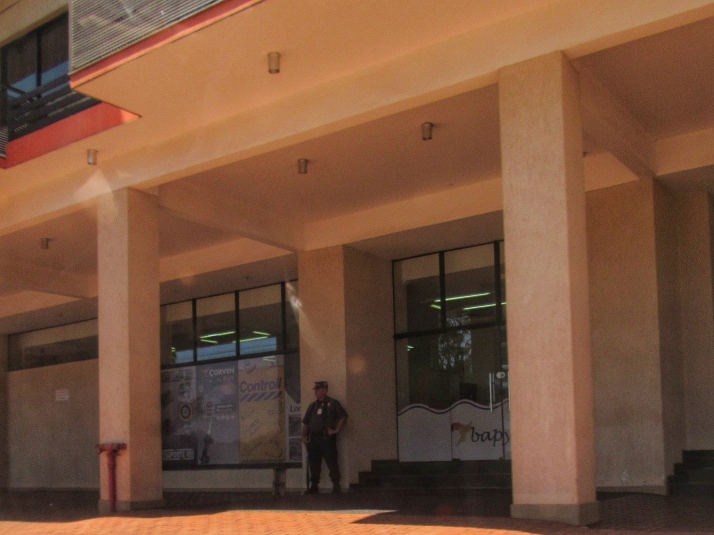 On our first foray into the shopping world we were immediately befriended by a guy who said he was from Bangladesh. We were on our way to the Lai Lai shopping complex as we were told you can get Apple accessories there and I’ve been needing a particular connector since it was stolen in Chile. Apple stuff is almost non-existent in Chile, Argentina and Uruguay. We asked this guy for directions to Lai Lai and JH got talking to him as he’s been to Bangladesh. So he told us he was going near there and would show us the way. He led us on this crazy dash through the side streets at breakneck speed and I was starting to freak out as all my instincts were screaming ‘wrong way! go back!’. As expected he led us to a different shop where his ‘mate’ had the connecter I wanted. Oh well I thought, just go with it, but then when he insisted on paying for it and then taking me somewhere else so I could pay him back I knew for sure things weren’t right. ‘No deal’ I said and walked away. When we got outside I started to move very quickly through the street stall jungle with him shouting ‘hey, Australia!’ behind me. After a few quick swerves we managed to get away and found our own way to Lai Lai and got the connecter. This is the only suspicious encounter we’ve had though. Everyone else is really friendly and lovely.

Cuidad del Este is only about fifty years old and it is pretty ugly – all concrete blocks and big fences. Everyone’s very careful. Doors are double locked and there’s security on everything. Taxi drivers lock all the doors when you get in and even our small block of residential apartments has a 24 hour guard. On the surface it seems to be your regular kind of unsavoury border town full of hustlers but apparently the real business goes on underneath. The story goes that customers come and put their orders in during daylight – mainly for electronics, weapons, Paraguayan marijuana and Columbian cocaine – then they go back across the border. Their order is all wrapped up in waterproof packaging and delivered at night by boat to smuggling hidey-holes in the riverbank. Each of these smuggler posts is run by a ‘boss’ who coordinates delivery to elsewhere. Once you know what to look for you start seeing these packages everywhere. Note the guy on the left carrying the package over his shoulder.

Just outside Cuidad del Este is Itaipu Dam, the second largest dam in the world with 14.000MW of installed hydro-electric power. The largest is now the Three Gorges in China. A joint Paraguay/Brazil project the Itaipu supplies almost 80% of Paraguay’s electricity and 25% of Brazil’s. This is the equivalent of burning 536,000 barrels of oil per day or 10 nuclear power stations. I’m not sure how much coal that is but it’s a damned lot. It is renewable, non-polluting energy but the environmental and social damage caused by its initial construction was massive. 1350 square kilometres were flooded displacing 10,000 people and the biggest (and apparently impressively beautiful) waterfall in the world was destroyed.

A system of reserves was set up to preserve the biodiversity of the flooded region however it’s estimated that 50% of plant and animal species were lost. Too much? Undoubtedly. Worth the cost? It’s a question we’ve been pondering. We went out to visit Tati Yupi, the closest reserve. We didn’t see any wildlife but supposedly (hopefully) they’re there somewhere.

12 thoughts on “The Supermarket of South America”