Back in Montevideo, Uruguay, I’m trying to get my head around this intriguing city. We were going to stay in the amazing but unsettling Palacio Salvo again but (much to my relief) it was unavailable. Our alternative AirBnB is still in the Cuidad Vieja (old city) but down at the port end, just a couple of blocks from the huge River Plate. Giant cruise ships sail right into the port and park just at the end of the street. So strange.

Our new apartment isn’t nearly as creepy on the inside as the Palacio Salvo but I find myself looking over my shoulder a lot on the street outside. As with many of the old areas of Montevideo it has a rundown feeling. Every third building is an empty shell and the cobbled paths are crumbling with gaping holes and piles of rubble. Graffiti is everywhere (some artistic and some not) and rubbish swirls around in the strange wind that comes up off the big brown river. All of the streets in this area are dark and deserted at night, apart from the occasional shadowy figure lurking in doorways. I think it’s the empty abandoned feeling that I find so disturbing but in a deliciously gothic horror-movie kind of way.

The buildings are really just so amazing – intricate, elaborate, varied and stunning – and there’s so many of them. We walk around for days, looking up with our mouths hanging open. It must have been an incredibly beautiful city before it hit hard times and began to crumble. Many of the buildings are wonderfully maintained and/or restored but it is this overall sense of decaying haunting beauty that resonates so deeply.

Amidst the ruins are some brand new shiny buildings, some incredibly ugly tower blocks from past decades and some totally surreal elements of modernity. The police zip around on segways! I tried to catch a photo but they were too fast. There are fancy cars, designer shops, food chains, gourmet restaurants and groovy bars. One special place is the cafe upstairs in the Librería Puro Verso. The original sign over the door translates as ‘Anonymous Society’. Intriguing. It feels extremely civilised to sit surrounded by books, gazing down into the cobbled square and eating the best dessert ever (Red Berry Soup).

Montevideo, and Uruguay in general, are in recovery from some tough economic times with half a decade of widespread poverty and related issues. The ‘Broad Front’ government (a coalition of left wing parties) has been in power since 2004 and their holistic policies have made major improvements across all areas. Uruguay is now heading into the future in a much better position. Jose ‘Pepe’ Mujica known as the ‘world’s humblest (or poorest) president‘ has just completed his five year presidential term. He is a big hero of ours and we half hoped that we might catch a glimpse of him in Montevideo. We did hang around some of his possible haunts like a couple of old groupies but sadly we didn’t see him.

Montevideo is something else. It doesn’t jump up and slap you in the face like Buenos Aires, or probably Rio, but it does gradually reveal itself over time. As Montevideo unfolds I realise that it is actually in a process of metamorphosis. As many as possible of the old buildings are being saved and the city is having a slow facelift. There is a lot going on (culturally, musically, politically, socially) and I would love to spend a much longer time getting to know it. I think I would fall seriously in love. If you’re heading to Montevideo this blog by a Welsh woman who has fallen in love with it is the best source of information. 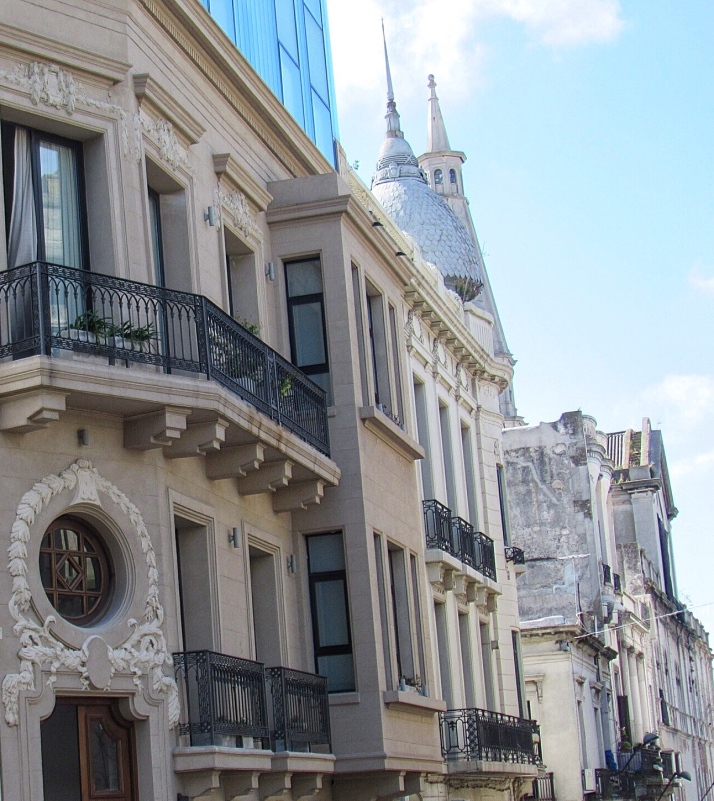 In another decade or two the rejuvenation to a modern and once again beautiful city will probably be complete and the naked bones of its past will be glossed over. If you want to experience the especially surreal aesthetic of Montevideo in transition, come soon before it passes. I hope it manages to retain its special charming weirdness.