Note that ’bang’ is pronounced ‘bong’.

One of the best things about going to Battambang is getting there by boat. The boat leaves Siem Reap, travels briefly along the very dirty Siem Reap river, crosses the northern end of Tonle Sap – the largest freshwater lake in South East Asia, and then ambles along the Sangker River to Battambang.

Gliding through Tonle Sap is a glimpse into another world, where life is lived almost entirely on water. Life on the lake looks pretty good. I could live there in one of those cute floating houses – if I could bring myself to eat fish, or build a floating vegetable garden. JH and I debated floating garden designs as we travelled along.

Once we exited Tonle Sap and entered the Sangker River, people became poorer. In some places, whole families were living under a piece of cloth or plastic stretched across bamboo poles and sticks. This is the dry season and the river is very low, so my hope is that this situation is temporary and that they actually live in boats or on the water in other seasons. I don’t know though.

The boat is supposed to take six hours to get to Battambang but now, in the dry season, it takes eight or nine. Some parts of the river are so low and muddy that the passengers have to get out and push. It’s these fascinating, uncomfortable journeys by unusual transport, to places unfamiliar, that really feel like I’m on an adventure. 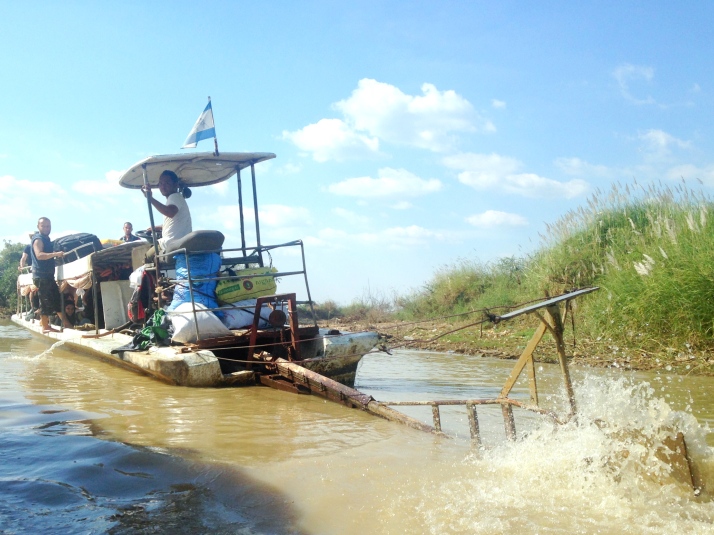 Muddy section of the Sangker River

I booked some cheap, centrally located accommodation in Battambang. To our dismay it turned out to be a backpackers hostel, complete with crappy showers and doorknobs that fall off in your hand. JH and Mr. A had fun terrorizing the youngsters – outdrinking them, beating them at pool and challenging their world view. Bless. I couldn’t be bothered and took myself off to bed early every night. Yes, I know I was once a young backpacker too. Sigh.

Just around the corner there’s a whole street of household appliance shops. A few happy hours were spent in there. We came away with some 12V ceiling fans (for solar) for $10 each. Why are these not available in Australia? Oh that’s right, it might distract from the big dirty business of digging up coal.

Riding the ’norry’ or Bamboo Train is the most fun thing to do in Battambang. After the Khmer Rouge shut down the trains, locals fashioned ’carriages’ out of bamboo mats on wheels, powered by a small generator or motorbike motor. The wheels were apparently salvaged from abandoned war tanks. They can go quite fast, up to 40km or so per hour, and are a cheap and easy way to transport people and things. They can be easily dismantled and lifted off the tracks to allow another to pass or to turn around and go back the other way.

Lifting the bamboo train onto the track 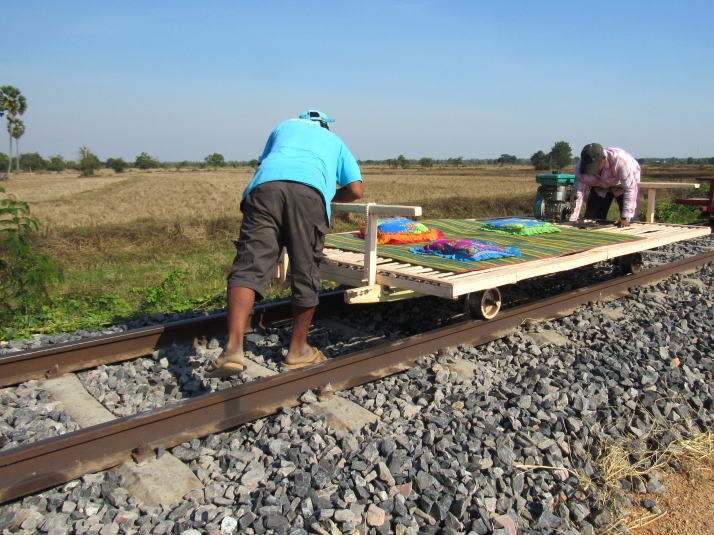 Making the carriage all comfy

We had one scary moment when a cow stepped onto the track in front of us. We all squeaked! Luckily, it quickly saw the error of its ways and stepped back, just in time. I completely missed that perfect photo opportunity.

Bamboo train track without a cow

On the nearby mountain of Phnom Sampeau are the ’killing caves’ where the Khmer Rouge tortured and murdered many people, including children, and threw their bodies into the caves. There are memorials of bones and other heartbreaking reminders of the atrocities. In Cambodian fashion they’ve incorporated the past horror into a place of beauty. A peaceful place of gardens, golden Buddhas and temples with chanting monks.

Further down the mountain there is a bat cave. We sat at a cafe, with hordes of other tourists and locals, to watch millions of little wrinkle-lipped free-tailed bats emerge from the cave at sunset and fly off to get their dinner. They kept on coming for literally hours. I’ve never seen so many bats.

The highlight of the whole trip for me was the same as always – monkeys! There are not many things more adorable than macaques – with their big eyes and sticky-up hair.

All in all, it was a most excellent trip to Battambang.

6 thoughts on “A trip to Battambang”